Having a university degree is grossly overrated 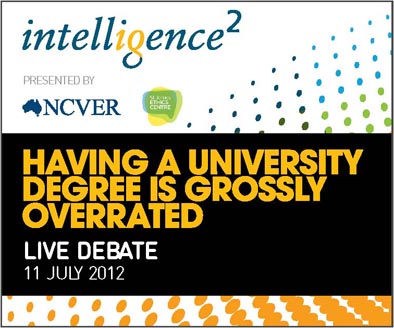 This landmark event will see nationally and internationally acclaimed speakers debate the proposition Having a university degree is grossly overrated at the iconic Adelaide Town Hall.

eginning in the United Kingdom in 2002, IQ2 is now staged in the US, Greece, Asia and Australia and attracts a sell-out crowd to each event. The IQ2 debates are exciting, witty and thought-provoking and take the traditional Oxford-style approach to debating. Six speakers argue either side of a sharply-framed proposition.

After the formal arguments, it’s the turn of the audience. The audience will vote on the motion – both before and after hearing the arguments. It’s a lively night of interchange between the speakers and audience members, electric with drama and excitement.

Speaking for the proposition will be:

Speaking against the proposition will be:

For more information go to: http://www.ncver.edu.au/newsevents/events/iq2.html