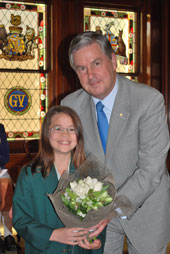 On Friday 4 November 2011 His Excellency Rear Admiral Kevin Scarce AC CSC RANR, Governor of South Australia (pictured at right with an Mercedes College debater) as Patron of Debating SA hosted a reception at Government House for the presentation of awards for the winning and runner up teams as well as the Debater of the Year award recipients of the 2011 Schools’ Competition.The reception was attended by a total of 120 guests consisting of the 60 awardees, and their families.

After a welcoming address from His Excellency, a reply speech was given by Miss Alexandra McGee, Senior Division Debater of the Year from Pembroke School. His Excellency as Patron of Debating SA then presented medallions to each of the debaters.

Following the reception’s formalities, guests were invited by His Excellency to explore the grounds of Government House.