A debate is set up as shown in the diagram below. 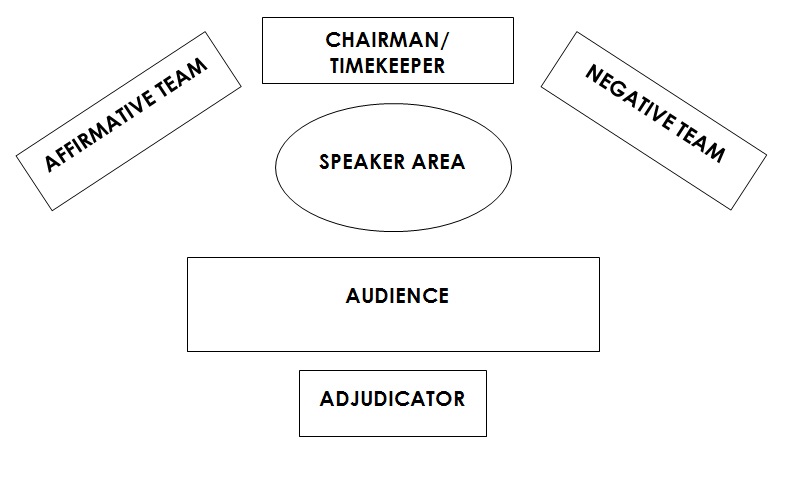 Official and Unofficial Debates and Teams

Debates without Opposition (‘vs Adjudicator debates’)

If a team arrives at a debate where there is no opposition due to a forfeit or otherwise, that team shall have the option of:

Quodlibetical Debates are debates where the topic is in the form of a scenario, which often presents debaters with a moral dilemma. Debaters should debate the issues presented by the scenario but may refer to external sources unless otherwise advised by Debating SA.

Wrong side of topic prepared

Debating SA will notify both schools if an adjudicator is available.

Due to the significance of finals debates and value to future training for the debating community, it is a condition of entry into the finals series that students agree to be filmed. Where a team member does not wish to be filmed, the team is able to substitute a team member who is willing to be filmed. The team must notify Debating SA that this is the case.

Debater of the Year Awards

Debater of the Year Awards will be held for all divisions to recognise excellence in debating.

The Debater of the Year for each division will be decided based on the following criteria:

Code of Conduct for Participants and Spectators

Please refer to the Code of Conduct.

For further information regarding debating please refer to the Official Debating Manual which has a detailed explanation of all the formalities of debating.